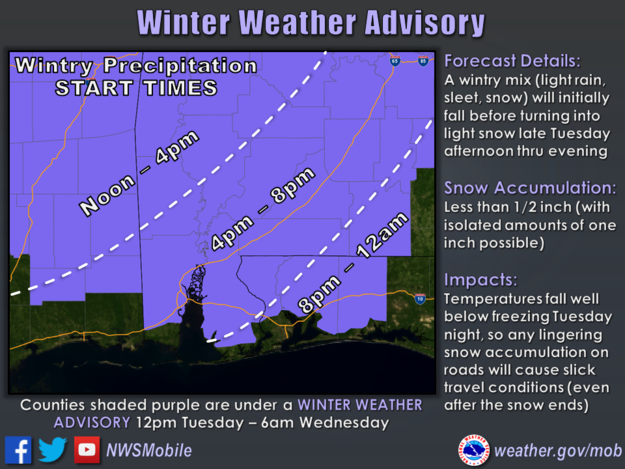 Winter Storm Warnings, Advisories and Hard Freeze Warnings for Much of Southeast US

CLANTON – At 6 am Tuesday, a Winter Weather Advisory is in effect for all of Alabama. 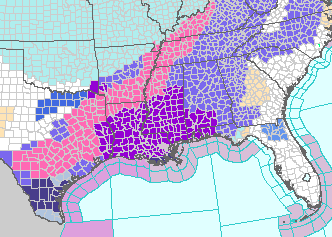 Snow will move into northwest Alabama around daybreak today and exit the southeast sections around mid-morning Wednesday. 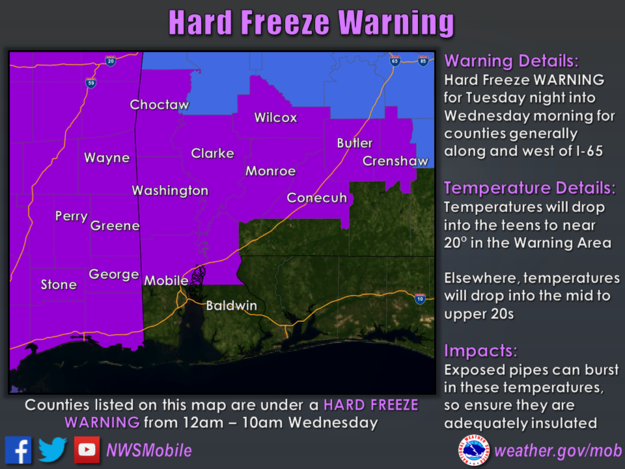 What’s Expected:
Anywhere from ½ to 1.5 inches total snowfall, but there could easily be areas of higher amounts. Some of the forecast computer models last night show amounts approaching or exceeding two inches south of highway 80/I85, and east of I59. The point is the snow ratio to liquid water equivalent is very high, meaning just small amounts of liquid will produce higher than normal snowfall totals. To pinpoint potential areas of 2+ inches (a few hundredths of an inch water equivalent) is not possible at this point.

When:
The graphics below are from the National Weather Service concerning arrival times. 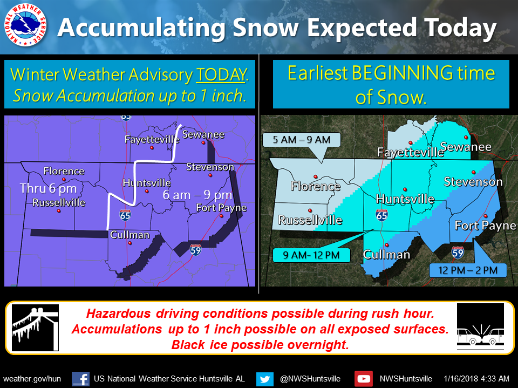 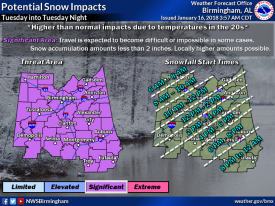 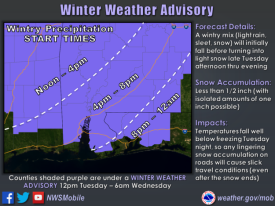 Impacts:
The snow will occur at the same time temperatures are dropping into the lower to middle 20s. As a result, any snowfall will likely melt initially, then refreeze on many roadways, especially over the northern 2/3 of the state.

Temperatures will become bitterly cold, with low temperatures both Wednesday and Thursday morning ranging from the single digits north to lower 20s near the coast. North of a Livingston – Clanton – Alexander City line, temperatures will remain below freezing from Tuesday morning until Thursday afternoon. Thus, any ice on roads will likely cause travel issues for several days.

Recommendations:
If at all possible, plan to be off the road when the first flakes start falling from the sky, since road conditions will quickly deteriorate. Also, allow extra time to reach your final destination to avoid potential traffic jams and/or accidents. Don’t leave too late, potentially get stuck and then have to deal with icy roadways. For areas that have icy roads, travel may be difficult or impossible until Thursday afternoon. Make sure you plan for that possibility.
Finally, for the latest on road conditions across the state, go to: www.algotraffic.com