CLANTON – March 19, 2018 – As we get closer to this unfolding event, the system continues to intensify. The Storm Prediction Center (SPC) has upgraded their forecast as of 1130 am CDT, which is shown in the graphic below. What this is saying is that for the red hatched area, confidence has increased such that supercell thunderstorms will develop with a significant tornado risk, including strong to violent, long tracked tornadoes. 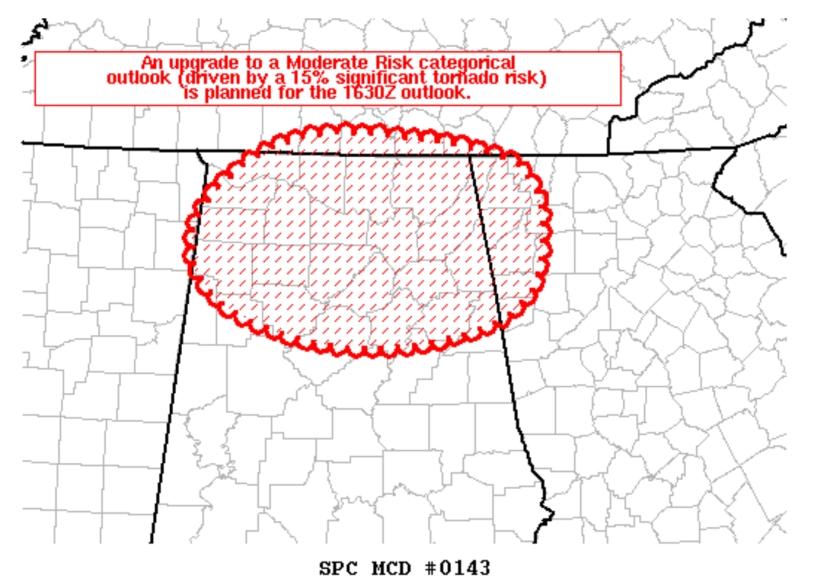 There are still some uncertainties about the first wave which is shown in the graphic below. The darker shaded region is the most favorable areas for storms. It is still possible that severe weather will not occur, but if the expected showers become thunderstorms, the atmosphere is such that explosive supercell development would occur. If there is any good news, it’s that coverage is expected to be isolated and most will not be impacted by storms.

The second wave will be more powerful and bring the greatest risk of severe weather, with a broken line of supercells moving southeast across the state. ANY location in the shaded area could have severe weather, including tornadoes, and especially for the northern half of the state. The following graphic shows the areas likely impacted.

Now is the time to begin preparations for severe weather, not when an actual warning is issued. For more information on being prepared, go to https://www.ready.gov/severe-weather