CLANTON – During my 35 year career with the National Weather Service (NWS) prior to AEMA , I remember working numerous severe weather events where warnings were issued with great lead times, only to go home and either read or see people interviewed on television saying, “It struck without warning”.  Honestly, it was and still is one of my biggest frustrations.

Certainly, not every severe storm had or will have a warning in the future, but things have greatly improved over the years.  In Alabama, this includes the warnings themselves, dissemination and communication.  But, the premise remains the same:  You can’t protect yourself or loved ones if you don’t receive the warning nor take proper action! 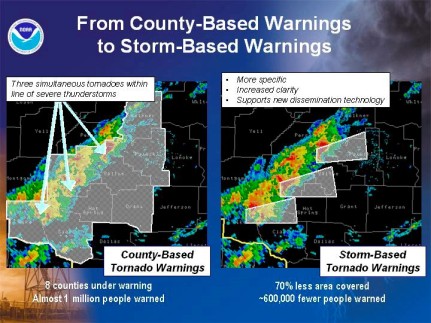 Let’s first discuss the basics.  Tornado, Severe Thunderstorm and Flash Flood warnings are issued by the NWS.  In 2007, warnings went from being county based to specific areas within a county or counties under the actual threat.  These are called storm-based or “polygon warnings”.

NOAA All-Hazards Weather Radio (NWR) is the only “official” NWS method of dissemination. When set up properly, the alarm is as loud as a smoke detector alarm, which can wake you up in the middle of night and potentially save your life. However, NWR is still county based, which means everyone in the entire county will be alerted, even if they are not in the actual storm based warning. Unfortunately, the NWS has no plans to upgrade weather radio anytime soon.

Outdoor sirens are operated by local or county officials, not the NWS. They are called outdoor sirens because they are meant for just that – people who are outdoors. To rely on sirens alone is a huge mistake. Sirens may not be heard indoors due to a number of factors.

Social media is used by the NWS, television meteorologists and private companies, and many apps are available for downloading. But these methods may not always be in real-time or reliable. According to Chief Meteorologist Josh Johnson, WSFA Montgomery, he believes one of the biggest issues is, “the proliferation of inaccurate weather information. The general public has never had more sources of weather information than they do today, and some of them are not very good. Apps come preloaded on phones and most don’t provide adequate information and context during active weather.”

Chief Meteorologist Mark Prater, WIAT Birmingham, agrees. “In a mobile phone world, apps and alerts aren’t always reliable. Often, people have apps that are designed to alert them about impending weather and they haven’t or don’t understand how to properly activate for their areas.” Mark also states, “weather radios should be a mandatory item in Alabama new construction, just as importantly as smoke detectors.”

Here is an example of a social media post by NWS Birmingham for an actual tornado warning. This storm based warning was for sections of Autauga and Chilton Counties (north of Montgomery). Notice that the towns and areas around of Maplesville, Stanton, Pletcher and Billingsley (dark shade) are under a warning, but most areas of each county, including the towns of Clanton and Autagaville, are not.There appears to be a much bigger issue according to recent research, comments by the public and opinions from meteorologists. Many people can’t identify where they live or work when looking at a map. Mark Prater says, “A number of our viewers still struggle finding where they are located during severe weather events.”

The same thing occurs when graphics are disseminated with maps describing when and where severe weather will occur in the future. Even though looking at the map “should” answer most questions, time after time numerous people ask, “What about where I live? What’s going to happen to me?”

To prove this point, here is a map of Alabama with county outlines. Can you both name and pick out the county you currently live in or travel to on a regular basis? Be honest

Ok, how about now? Can you pick out the general area within the county you live or frequent on a regular basis?

Why is it important to figure out where you are on a map? Because this is way most graphical severe weather information is presented to the public. No doubt, meteorologists understand that we must do a better job of communication to work through these issues. However, you have a responsibility as well to know where you are located in relation to a storm based warning and whether or not you may affected by the storm. You should also know the name of the counties that surround where you are to give yourself a one county buffer as storms potentially approach you. This is the first step to protecting yourself and loved ones.

What else should you do? Chief Meteorologist Alan Sealls, WKRG Mobile, says, “Get multiple sources and methods of trusted weather information. Weather app alerts and storm based warnings are great, but weather app forecasts are not perfect.”

Meteorologists universally agree that you must have multiple trusted sources of weather information. Every single source has the potential for failure. Alan states electricity, satellite, cable and internet can go out. Cell towers can lose service. Sirens and even weather radio can fail. But, having more than one source greatly increases your chances of receiving critical warning information.

You should have at least three sources of trusted warning information (I personally have four), and must know if your physical location is in the actual warning.

Upcoming blogs will provide additional safety and preparedness information from our television and NWS partners as we enter our spring severe weather season. When it comes to severe weather in Alabama, it’s not a question of “if” it will occur, but “when”. Start your preparations now! Waiting for actual severe weather to begin and then trying to become prepared is too late.