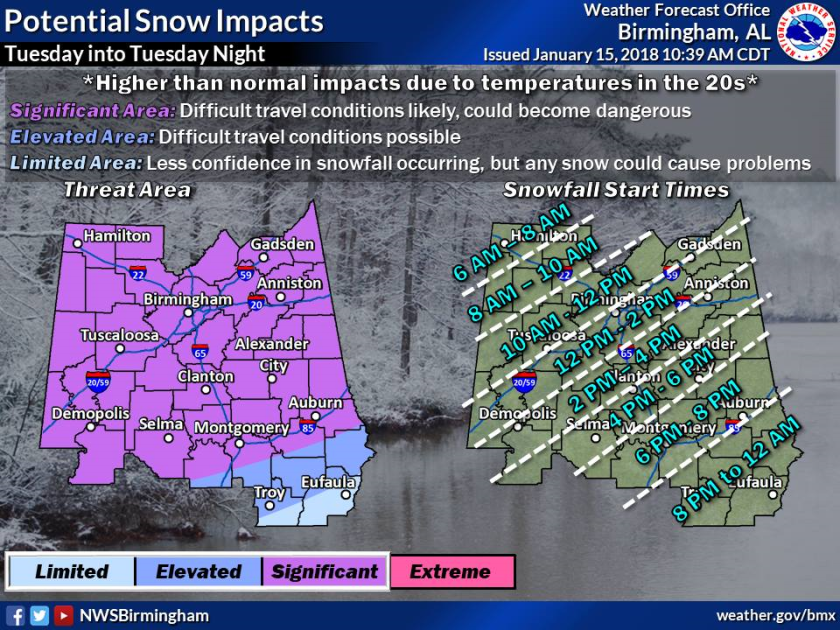 CLANTON – At noon on Monday, the 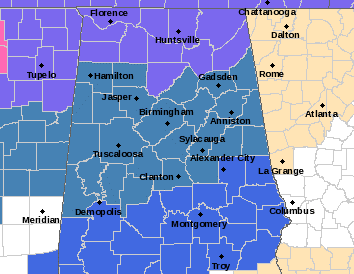 good news is many people throughout Alabama will likely see snow from early morning Tuesday north to the early morning hours Wednesday. Also, total snowfall accumulations are likely to be two inches or less under most locations across the state.

Here’s the bad news. There will likely be significant and potentially widespread travel problems across a large portion of the state. Every weather event is different, but for those that lived through it, this could be very similar to the “snowmageddon” event in January 2014.

What’s Expected:
Anywhere from ½ to 1.5 inches total snowfall, but there could easily be areas of heavier snow with higher amounts. 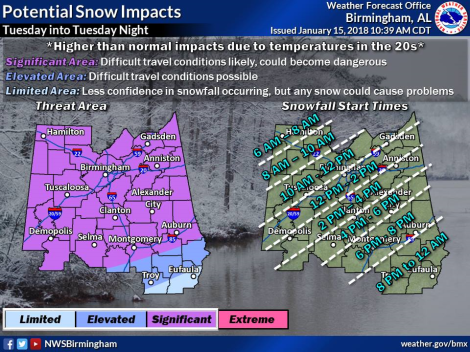 The graphics below are from the National Weather Service concerning arrival times. For south Alabama, including Mobile to Evergreen to Ozark and areas southward, snow could occur from 4 pm in the west to after midnight in the southeast.

Impacts:
The snow will occur at the same time temperatures are dropping into the lower to middle 20s. As a result, any snowfall will likely melt initially, then refreeze on roadways very quickly, just like it did in ce 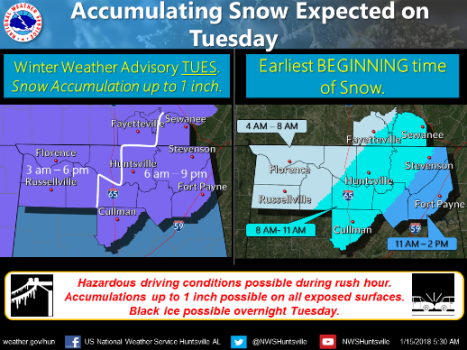 ntral Alabama in January 2014. The roads became a sheet of ice, causing many accidents with roads becoming impassable, even though less than two inches of snow fell in most locations.
Then, temperatures will become bitterly cold, and by sunrise Wednesday, lows will range from the single digits north to low 20s near the coast. In fact, over the northern half of the state, temperatures will likely remain below freezing from Tuesday morning until Thursday afternoon. Thus, any ice on roads will likely cause travel issues for several days.

Recommendations:
If at all possible, plan to be off the road when the first flakes start falling from the sky, since road conditions will quickly deteriorate. Also, allow extra time to reach your final destination to avoid potential traffic jams and/or accidents. Don’t leave too late, potentially get stuck and then have to deal with icy roadways.
Finally, let me explain something a lot of folks get confused about. The National Weather Service criteria for a Winter Weather Advisory for total snowfall of two inches or less. For a Winter Storm Warning, greater than two inches is expected. However, for this event, whether or not where you live is under an advisory or a warning, the impacts will likely be the same. Don’t think travel will be easier because it is “just” and advisory!