By Jim Stefkovich, Meteorologist, Alabama Emergency Management Agency
CLANTON – On August 9th, the National Hurricane Center (NHC) updated their outlook predictions for the hurricane season, which runs through November 30. The season will continue to be an active one, and they have increased the predicted number of named storms. I’ll explain the reasoning below.

The first reason is during the first nine weeks of this season, which started on June 1, has already been active, with six named storms. This is half the number of storms during the entire season and double that would typically form by early August. Alabama has already felt the effects of one of these systems in June, Tropical Storm Cindy, which brought flooding rains and a few tornadoes to sections of the state. 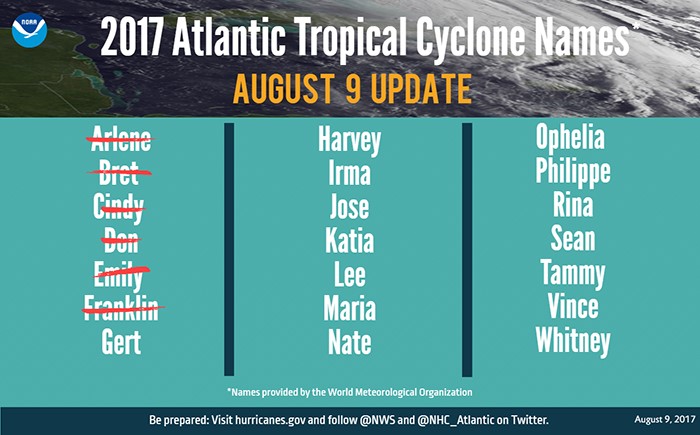 Warm water and relatively light winds well above the surface are key ingredients for tropical systems to form and sustain themselves. Currently, there are warmer waters across the tropical Atlantic than the computer models previously indicated. Also, both the wind and air patterns in the tropical Atlantic and Caribbean where many storms develop are very conducive for development.
Finally, as you can see from the graph below, we are entering the peak of hurricane season, from late August through September, when storms are most frequent and at their strongest.

Please note that this forecast does NOT indicate when or where a storm will strike. But, it does let us know that the hurricane season will continue to be active, we need to stay aware, and be ready if another storm approaches our state.

Finally, and as a reminder, as Tropical Storm Cindy showed us earlier this year, it’s not just a coastal problem. All of Alabama can be affected in various ways from tropical systems. It doesn’t take a major storm to produce major impacts.